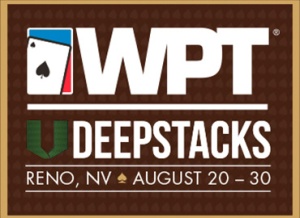 As summer winds down, it’s a great time to play poker tournaments in California and Nevada. These events feature buy-ins that will appeal both to professional and recreational players. At the Bicycle Hotel & Casino in Bell Gardens, California, the World Poker Tour’s Legends of Poker Main Event will consist of three starting days beginning on Saturday, August 29 through Monday, August 31. The $3,700 buy-in No-Limit Hold’em tournament final table with 6 players will be filmed on Friday, September 4 at 4 p.m. The winner will receive a seat into the WPT World Championship. Last year’s winner, Harry Arutyunyan, topped a field of 593 entrants and collected $576,369. Previous winners of this prestigious tournament include Mel Judah and Dan Harrington.

The Atlantis Casino Resort Spa in Reno, Nevada is currently hosting the WPT’s DeepStacks tour, which runs through Sunday, August 30. The 11th stop on the DeepStacks’ 16-stop schedule features both No-Limit Hold’em and Omaha events with buy-ins to suit every budget. On Wednesday, August 26 there are two No-Limit Hold’em tournaments—one is a two-day, $550 buy-in event with a $40,000 guarantee, the other is a $150 buy-in tournament with a $5,000 guarantee.

If you like to plan ahead, the next California stop on the WPT DeepStacks tour will be held at the Ocean’s 11 Casino in Oceanside, California just north of San Diego and will run from October 17-26.

I am often asked if poker is a young man’s game. Based on my almost fifty years of playing, I would have to say yes.  Let me explain.  The 2013 World Series of Poker November Nine, which was played this week, featured a final table with an average age under 30.  In fact, Ryan “the Beast” Riess, the youngest player at the table at 23 years of age, won the championship title after eliminating four players before entering heads-up play against eventual runner-up Jay Farber.

When I was young myself and had no responsibilities, I played a hyper-aggressive style. I did not care who I played even if they were legends.  I remember playing a pivotal hand the first couple of hours in the Main Event of the World Series of Poker against Doyle Brunson when I was much younger.  I called a small raise from the big blind with 3 5 spades, and the flop came 2 4 6.  I flopped a small straight, but there was a flush draw on the board.  I was very nervous staring at this poker legend across the table, so I just said all-in.  He said, “Kid, I hate to go broke so early, but you must be on a draw to move in or have a pair.  I call.” He had a big pocket pair, so I won the hand and knocked out a legend.  When he got up, he said he could not believe he played the hand so poorly.

That hand helped reinforce my belief that being aggressive was the best way to play poker because it gives you more weapons in your arsenal, and it worked well for me for years.  It helped me to achieve the record for most consecutive cashes in the Main Event from 1991-1994. Dan Harrington said in one of his books on Hold‘em that Stu Ungar, Jack Keller along with myself started the aggressive style of play. I earned my nickname the Chipburner based on this style of play.  My younger kids still tease me about it and say, “Dad, why don’t you change your name to Chip Earner?”  They have a good point.

When you are young, going broke is just another way of saying “in between bankrolls.” According to media reports, WSOP champion Ryan Reiss was broke a year ago before winning second place in the WSOP Circuit main event in Hammond, Indiana in October 2012. However, once you cross into your mid-thirties, many players have families and mortgages.  With these added responsibilities, the prospect of going broke is scary and will affect one’s poker decisions.  When you are young, you have nothing to lose. It’s like that line in the Janis Joplin song Me and Bobby McGee: “Freedom’s just another word for nothin’ left to lose.”  When you are young, you can afford to take risks you are not willing to take when you are older.

Lyle Berman once said if there are 100 players in a tournament, and you are the best player in the world, you may still never win a title in your lifetime.  The combination of aggression and luck makes No Limit Hold’em very volatile.  Most of the best players now play mixed games to protect their bankroll because so many decisions in No Limit are little more than a coin flip.

There is no question that today’s young players have more information available to them that allows them to become expert players faster than we did in the early years, and it has definitely elevated the game.  The internet changed everything.  The explosion of internet poker has allowed many young players to hone the art of aggression, and they are very hard to beat. It has allowed these kids to get rid of their inhibitions. They do not play the person so much as they play the numbers.

Poker is now much more a math game, whereas in the old days it was more a people game.  We would look for certain players to play and avoid others.  Now you are just an anonymous seat number. This style has also made poker more of a lottery than a skill-based game.  Even though you are the best player, it does not mean you will always win.

After nearly a half a century of playing poker, I have to admit it is a young man’s game.  After seeing it from both sides, I will say this about age.  Playing poker for a living requires stamina.  The effects of aging on one’s poker game cannot be overstated. In 2005 I finished 97th in the Main Event at the age of 58.   The toll it took on my body affected my play. It was extremely tiring.  I blame myself for not being in the best shape, but as a young man, playing three days was nothing.  After a marathon poker session, I would take a shower and look for another game.

Nowadays after 10 hours, I can feel the pain.  My wife has introduced me to yoga recently, and it has helped me immensely because poker is both a mental and physical game.  Once you cross 50 years of age, you have to prepare more for the physical demands of these multi-day poker tournaments.

Now to answer the question I posed at the beginning of this article.  Youth clearly is an advantage in poker, but experience has its place, too.  Doyle Brunson once said, “When we put our feet under the table, we are all one big family.”  And I’m proud to be part of that family for nearly half a century.

Robert Turner is a legendary poker player and billiard marketing expert. He created Live at the Bike, the first live gaming site broadcast on the internet in 2002. He also created the Legends of Poker for the Bicycle Casino and the National Championship of Poker for Hollywood Park Casino both in 1995.

Robert is most well-known for introducing the game of Omaha poker to Nevada in 1982 and to California in 1986.  In the year 2000, he created World Team Poker, the first professional league for poker.  He has spent over 30 years in casino marketing and player development and has served as an executive host at the Bicycle Casino and MGM.  He is currently working with his new companies Crown Digital Games developing apps and Vision Poker, a poker marketing and managing group.

Follow Robert on Twitter @thechipburner.  Robert Turner can also be reached at robertturnerpoker@gmail.com for consulting, marketing and teaching.