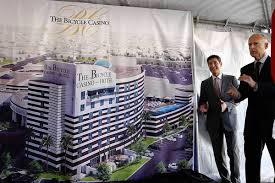 The Los Angeles poker scene is undergoing a massive transformation. We keep hearing how poker is on life support, but that is certainly not the case in Los Angeles. There are currently four major expansions and renovations being undertaken in card rooms throughout Southern California.

With over 240 tables, Commerce Casino is the largest card room in the world. Established in 1983, Commerce features a full-service 200-room Crowne Plaza Hotel. Commerce has undergone a major renovation of its hotel rooms and continues to upgrade its facilities. It has recently added to its game mix the Lucky Rabbit Party Pit with Playboy Bunnies as dealers and servers.

The Bicycle Casino is scheduled to open a new hotel and spa at the end of the year. The new expansion will include a seven-story, 100-room hotel. It will feature a sophisticated cocktail lounge, top-notch brewery, an open sundeck with private cabanas and a luxurious spa with a salon, sauna and treatment rooms. I saw the renderings for the new facility, and I have to say it will rival any resort in Las Vegas.

“The Bicycle Casino and Hotel is proud to present our new suites and suite-size hotel rooms beginning this December. With our renovated casino plus new restaurants, we will give our patrons the superb services we have always provided,” says Leo Chu of the Bicycle Casino.

The Gardens Casino located in Hawaiian Gardens, California, is building the largest poker facility in the world with the goal to have over 300 table games in the not-too-distant future. The new project consists of replacing the current temporary tent structure with a two-story 202,111 square foot building.

David Moskowitz, a co-owner of The Garden Casino, told me when all phases are open, the Gardens Casino will become the largest card room in the world. Eric Hoffman, manager of the Gardens Casino, said the VIP poker section in the new casino will double in size from 17 high-limit poker games to over 34.

This brings us to the massive transformation of Hollywood Park. The racetrack may be gone, but Hollywood Park Casino is in the midst of a major revitalization that will transform it into the premier casino and entertainment destination in Southern California. While the complex undergoes a physical overhaul, the management at Hollywood Park is dedicated to making the transition to the new casino as smooth as possible.

Ramy Wahba, Director of Casino Operations at Hollywood Park Casino says, “I am blessed and fortunate for having assembled a great team of managers and employees who are making our journey to success much easier. Likewise, I must recognize our executive members for their progressive vision and the support they are providing for this development. I am confidently driving toward an unmatched level of success for Hollywood Park Casino.”

Hollywood Park Casino will open a new poker room in 2016 that will be the most state-of-the-art poker room in the world. The new Hollywood Park will offer movie theaters, condos, restaurants and a new entertainment complex which should draw huge crowds to the new complex.

Besides opening a new casino, they are building a sports complex that may see future Super Bowls played at Hollywood Park along with bringing over a new Los Angeles NFL team. Nothing will equal the planned Hollywood Park facility. It will rival City Center in Las Vegas when the project is complete. This is in keeping with Ramy Wahba’s motto: “Give more and expect less.”

Los Angeles poker will soon be the center of the poker universe. With so much planned for poker players in Los Angeles, you can see why if you’re a poker player or table games player, you will have over a thousand tables all within 20 minutes of each other in Los Angeles.

With this much competition for their poker dollar, the players will really benefit. If you’re a poker enthusiast or desire to become a professional poker player, you may have to consider Los Angeles as your base. It’s a great time to be a poker player in Los Angeles.

Robert Turner is a legendary poker player and billiards/casino marketing expert. Robert is most well known for introducing the game of Omaha poker to Nevada in 1982 and to California in 1986. He created Legends of Poker for the Bicycle Casino in 1995 and Live at the Bike, the first live gaming site broadcast on the Internet in 2002.

He has over 30 years experience in casino marketing and player development. Find Robert on Facebook at https://www.facebook.com/thechipburner and on Twitter @thechipburner. He can also be reached at robertturnerpoker@gmail.com for consulting and teaching.