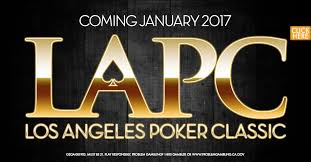 The Los Angeles Poker Classic (LAPC) got underway at the Commerce Casino on Friday with Event #1: $175 No-Limit Hold’em. This tournament featured a $100,000 guarantee and drew 1,079 players.

Event #1 Winner Jeffrey “Lee” Peterson took home $16,995 and the Remington trophy. In his winner’s interview, Peterson stated that he is a business owner who plays for entertainment. He took a five-year break from poker and last played in the LAPC’s Main Event last year.

He came back with a vengeance and plans on playing more events this year.

Tournament Director Matt Savage has put together a great schedule this year that should appeal to pros and recreational players alike. This week will feature a mix of events for mixed-game players starting with the $350 Omaha 8 or Better tournament on Monday.

This weekend will feature several No-Limit events, including a $1,100 WPT Main Event Mega Satellite that guarantees two $10,000 seats on Saturday, January 21 at 7 p.m.

Beginning the week of Monday, January 23, the schedule will feature several other mixed games, including a $350 H.O.R.S.E. event on Thursday, January 26 at 1 p.m.

The $10,000 WPT Championship will begin on Saturday, February 25 at 12 p.m. The series will end with the Championship final table taping on Thursday, March 2 at 4 p.m.

Patricia Chavira is a freelance writer specializing in poker. She writes the “Poker Scene” column for Gaming Today. Follow her on Twitter @pinkchippoker.