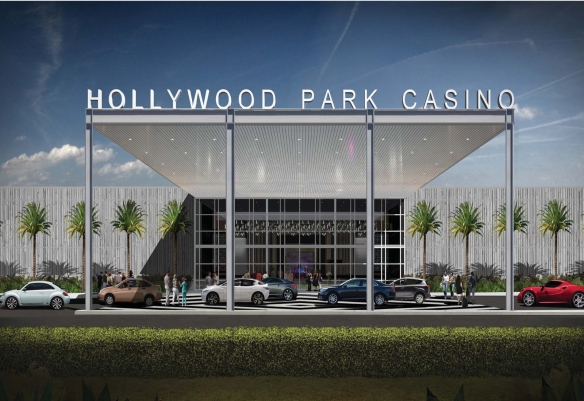 Card rooms all over Los Angeles have been stepping up their game the past year, and every time I went to see the latest opening–whether it was new $50-million hotel at the Bicycle Casino last December or the $90-million expansion of the Gardens Casino in April—I was impressed each time.

But I have to admit, when I walked into the new Hollywood Park Casino as part of a press preview last week, I actually said, “Wow.” I have played poker in card rooms and casinos in Los Angeles and Las Vegas for the past ten years, and Hollywood Park Casino has surpassed them all in luxury.

From the moment I walked through the all-glass entrance into the sun-bathed lobby with water cascading down each wall to my left and my right, I immediately felt I had stepped into a high-end Las Vegas property.

The first thing you see is not the gaming floor but rather a variety of dining and entertainment options. The Raise Lounge lives up to its name as it raises the level of luxury you would usually find in an L.A. card room. With tvs and plush seating throughout, this new component of the casino is sure to draw in new customers.

Right next door is the Century Bar & Grill, a sports bar and restaurant where concertgoers waiting for a show at the Forum can eat and drink before they watch their favorite performer on stage. And they may just be tempted to come back to play their favorite table game.

But what is unique about this property is the artwork throughout the property from the signature piece at the entrance to the locally-commissioned photography in the Century Bar & Grill.

Sitting on 11 acres right next to the City of Champions Revitalization project, Hollywood Park Casino is poised to become the leader in California gaming when it opens to the public in mid-September.

With football fans coming from all over the nation to the future home of the NFL’s Los Angeles Rams, the City of Angels finally has a modern, upscale casino that we are proud to show the world.

Patricia Chavira is a freelance writer and social media consultant specializing in poker. She writes a column called the “Poker Scene” for Gaming Today. Follow her on Twitter @pinkchippoker.